Welcome to a four-book reading wrap-up.
This is where I will be doing a mini-review of four of my just read books.  Let's get started...
You can watch the book review video via this link
Kathiey's World YouTube 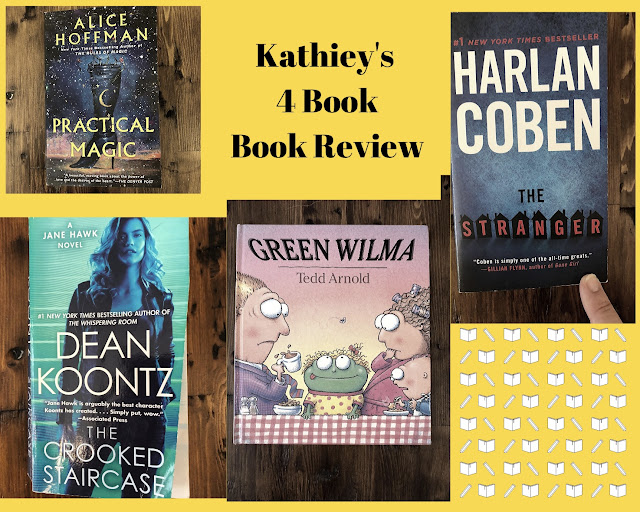 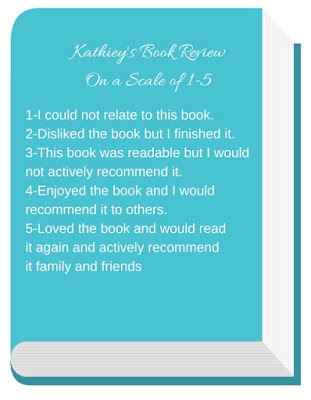 For me, the flow of the book is very important. 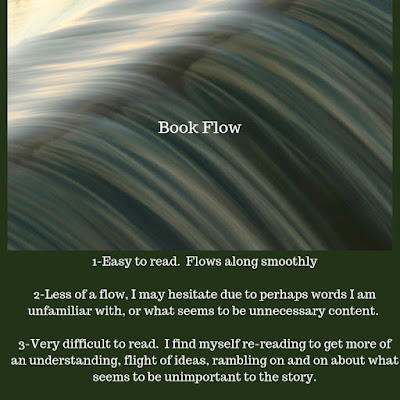 "The Stranger"
by
Harlan Coben
449 Pages

From the book jacket...
"The Stranger appears out of nowhere, perhaps in a bar, or a parking lot, or at the grocery store. His identity is unknown. His motives are unclear. His information is undeniable. Then he whispers a few words in your ear and disappears, leaving you picking up the pieces of your shattered world."

Adam is living the perfect life, or so it would appear. He has two wonderful sons and a beautiful, loving wife. His life seems to be flowing along smoothly when "the stranger appears." This unknown man approaches him with a devasting secret, and after exposing this hidden truth, he walks away leaving Adam with a decision. Should he ignore this new information or should he investigate, what purpose would this stranger have in lying to him.
Meeting "the stranger" marks the beginning of the fracture of Adams life as he knew it. Adam, along with others approached by "the stranger" is drawn into a world of deception, lies, and even murder.
When I first started reading the book, I was utterly sucked in.  I loved the writing style and could not wait to see what was going to happen.  The book seemed to lose its focus, at least for me, as I got deeper into the story.  There are a few twists and turns that left me a bit confused. I wanted more detail.
Basically, the book is about secrets revealed and the consequences that go along with these secrets.  In many ways, I found this book lacking, but all in all, a good read.  I would give it a 3/5 on my reading scale.

As I was reading reviews for this book, I found that many fans of Coben love his books.  Among many of the reviews that I read, many readers said that this was their least favorite book by Coben.  With that in mind and after having enjoyed Coben's writing style, I decided to read another of his books.  I ordered "Tell No One," I will let you know in upcoming reviews what I think after I read it.

Quote from Amazon
"Wilma's parents don't know quite what to do when their daughter wakes up green and requests bugs for breakfast. At school, Wilma's teachers are appalled by her unusually colorful antics. Wherever Wilma goes, surprises await her and readers of this irresistibly funny fable. "Absurd and action-packed." —The Bulletin of the Center for Children's Books"

This is one of my grandkids favorite books.  Maggie always gets excited when we are about to read "Green Wilma".  The storyline is great.  Little Wilma gets up one morning and she is green and suddenly has a strong desire to eat flies.  Her parents and the staff at school don't know how to handle this strange behavior.  Great book with wonderful illustrations.
I would highly recommend this book.

"Jane Hawk knows she may be living on borrowed time. But as long as she's breathing, she'll never cease her one-woman war against the terrifying conspiracy that threatens the freedom--and free will--of millions. Battling the strange epidemic of murder-suicides that claimed Jane's husband, and is escalating across the country, has made the rogue FBI agent a wanted fugitive, relentlessly hunted not only by the government but by the secret cabal behind the plot. Deploying every resource their malign nexus of power and technology commands, Jane's enemies are determined to see her dead . . . or make her wish she was."

Jane Hawk is an agent gone rogue.  She is now fighting factions of the government, The Arcadians, who desire to do harm to anyone they see as threats to society.  The Arcadians are singling out people they don't like or agree with and injecting them with Nanobots.  These body invaders can change the way a person thinks and can also control their actions.
This book started out as an edge of your seat book.  I was quickly drawn in by the storyline and the characters who are running for their lives.  Somewhere amid the hundreds of pages the book seemed to get wordy and I began to lose interest but I continued to read as I cheered on the main character in her quest against evil.  Even with the overly descriptive text I probably would have given the book a 3.5 but then after nearly 600 pages, I made it to the end to find there was no end.  A total cliff hanger.  I am of the mindset that I need conclusions.  They don't have to be a good outcome but please wrap it up for me.  Because of the massive cliffhanger, I am giving it a low score.
I gave this book a 2/5 on my reading scale.

Good Reads Rating is 3.79/5
286 pages
Genre-Fiction, Fantasy, Magical Realism
Quote from the Book Jacket
"For more than two hundred years, the Owens women have been blamed for everything that has gone wrong in their Massachusetts town. Gillian and Sally have endured that fate as well: as children, the sisters were forever outsiders, taunted, talked about, pointed at. Their elderly aunts almost seemed to encourage the whispers of witchery, with their musty house and their exotic concoctions and their crowd of black cats. But all Gillian and Sally wanted was to escape."


For me, this book was a fun ride and an easy read.  The story centers around two sisters Sally and Gillian.  The sisters are orphaned at an early age and taken in by their two aunts who are witches and which are believed by the community to have magical powers.  This suspicion by the town lead the townspeople to suspect every bad thing that happens is caused by the Owen's sisters.
Being shunned by the town Sally and Gillian want to escape and start new lives.  This story follows them as they leave their childhood home and develop new lives.  You will get to know the loves in their lives, their children, the aunts that raised them and the ghosts that literally haunt them and cause their plants to grow.
It is interesting how everything circles back in the end when there is a reunion of sorts with all the Owen's women.

Don't forget to check out my book on Amazon