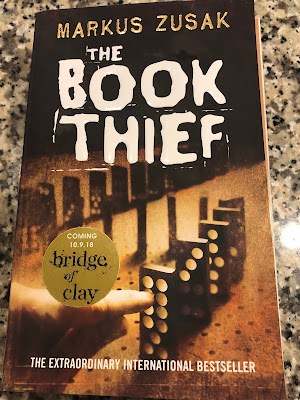 (At the bottom of this page is a link to the book on Amazon.  I am an amazon affiliate and if you click on the link and buy anything from Amazon I get a % with no added cost to you.  It is a win win:-)

Description found just inside the book...

"It is 1939 Nazi Germany. The country is holding its breath. Death has never been busier, and will be busier still.
By her brother's graveside, Liesel's life is changed when she picks up a single object, partially hidden in the snow. It is The Gravedigger's Handbook, left behind there by accident, and it is her first act of book thievery. So begins a love affair with books and words, as Liesel, with the help of her accordion-playing foster father, learns to read. Soon she is stealing books from Nazi book-burnings, the mayor's wife's library, wherever there are books to be found."

The story takes place during Nazi rule in Germany between 1939 and 1942.

The narrator of the story is  Death who gives his perspective of events.
I rather liked Death.  He did not cause the demise of anyone but when life left someone Death was there to collect their souls.

Death follows Liesel Meininger's life and through his narration you get to know her story.  Death is not supposed to get involved with the living, but on a rare occasion, he would make an exception and such was the case with Liesel.  Death had feelings and emotions like humans, and you could tell he cared for Liesel.


Quotes by Death
“His soul sat up. It met me. Those kinds of souls always do - the best ones. The ones who rise up and say "I know who you are and I am ready. Not that I want to go, of course, but I will come." Those souls are always light because more of them have been put out. More of them have already found their way to other places.”

“...one opportunity leads directly to another, just as risk leads to more risk, life to more life, and death to more death.”

“I have to say that although it broke my heart, I was, and still am, glad I was there.”

“The words were on their way, and when they arrived, she would hold them in her hands like the clouds, and she would wring them out like the rain.”

Character development was exceptional in this book. You feel like you know Liesel's friends and her adoptive family.  You see the good and the what I would call the evil that make up her life as she experiences atrocities during the Nazi invasion of her town.

I fell in love with many characters that were part of Liesel's life.
Liesel and her best friend Rudy will steal your heart.
Hans, Liesel's foster father, is a beautiful soul.  I have never met a man like him.  Her adoptive mother Rosa seems rather harsh, but on the inside, she is the opposite.  Max is the Jewish man that they have hidden in their basement, and Liesel cares deeply for him.

So the big question is, Is there book thievery involved?  The answer would be yes.  Her first book was "The Grave Diggers Handbook."  I think she managed to collect nine books total, not all stolen.

You can't help but have an emotional connection with Hans. Liesel and Hans would spend time learning to read together, and Lisel would later go on to offer hope and comfort through her reading.
Hans was a comfort to all who knew him.  It is interesting how Hans and Liesel would both use their gifts to comfort others.  Liesel would read to others as a distraction for those in extremely difficult times, and Hans would soothe their pain through his music.

I watched the movie, and it was good.  Again you don't get the detail that you would in the book but the film can stand on its own, and I would recommend it even if you have not read the book.


I love this book and highly recommend it.  If you have read it,
I would love to know you enjoyed it as much as I did.
Happy Reading Everyone!
KathieyV
Here is my Youtube review
Kathiey's World Book Review, The Book Thief 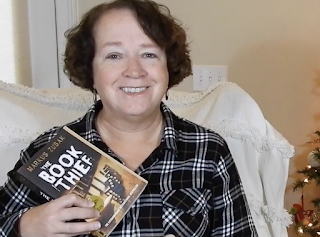