Now for a bit of North Carolina Trivia.
The Venus Fly Trap... 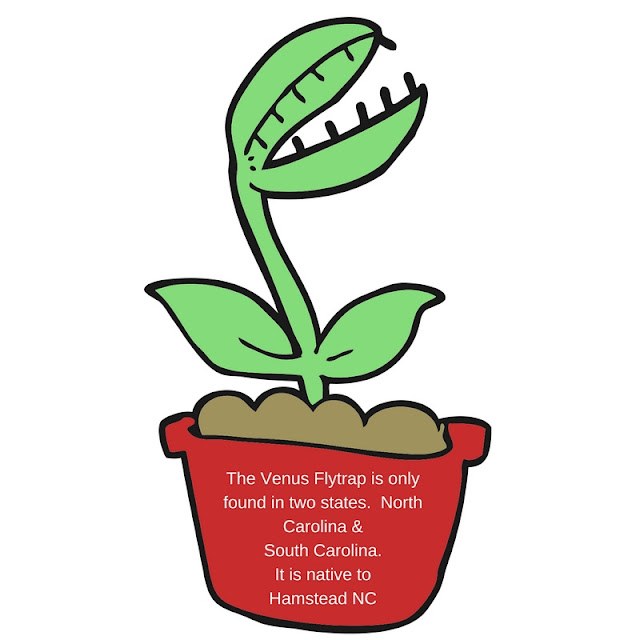 Here is wikipedia had to say about the Venus Flytrap.
"The Venus flytrap (also referred to as Venus's flytrap or Venus' flytrap), Dionaea muscipula, is a carnivorous plant native to subtropical wetlands on the East Coast of the United States in North Carolina and South Carolina. It catches its prey—chiefly insects and arachnids—with a trapping structure formed by the terminal portion of each of the plant's leaves, which is triggered by tiny hairs on their inner surfaces."

Where can you go to see venus flytraps in the wild?
There is a Flytrap Trail at Carolina Beach State Park.
You could also go to the Green Park Preserve.

So if you are playing trivia and the Venus Flytrap comes up here is what you need to know.  The following information comes from Apple Pest Control.
*The Venus Flytrap is native to East coast of North and South Carolina.
*Robot Flytraps have been produced in South Korea.
*It can take longer then a week for an insect to digest.
*Venus Flytraps should not be fed hamburger.  This protein will actually cause the plant to rot.
*The Flytraps actual trap has a limited life.  The trap can only open and close about 6 times before permanently closing. The flytrap will still live and continue to photosynthesize to provide nutrients for the plant but the trap no longer works.