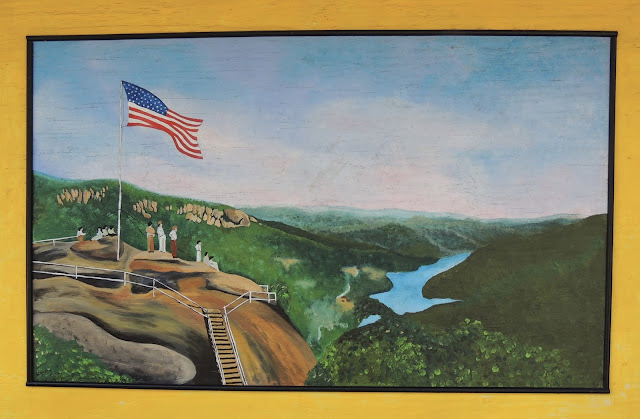 One of my goals in visiting Lake Lure was to climb the stairs to the Chimney Rock at Chimney Rock State Park.  I had heard there was a staircase of over 500 steps that lead to the rock and I could not wait to venture up the stairway.

Below is a quote from the park website..."Chimney Rock, the 535-million-year-old monolith for which the Park is named, is considered one of the most iconic sites in North Carolina. From its top, you’ll soak in the 75-mile panoramic views of Hickory Nut Gorge and Lake Lure. You can hike to the top of this towering 315-foot granite outcropping located on the very edge of the Blue Ridge Mountains. At an elevation of 2,280 feet above sea level, this mountaintop experience will take your breath away. The climb is well worth the effort!"

The entrance to the park is found in Chimney Rock Village. 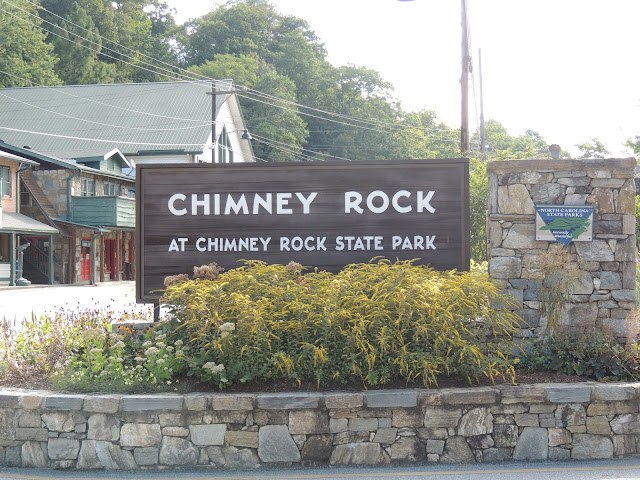 There is my destination...The top of Chimney Rock. 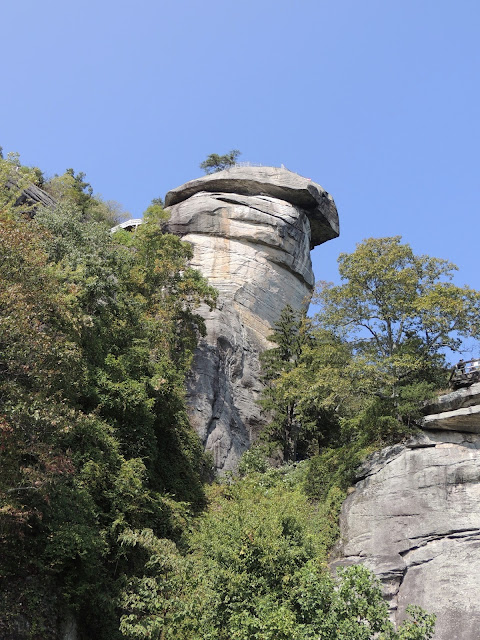 For those who cannot traverse the many steps to the top, there is an Elevator.  Here is a bit of history on the Chimney Rock Elevator from the website....
"Chimney Rock State Park is one of the few places in the world with an elevator inside a mountain! Our elevator has been around for quite some time; in late 1947, men began to blast a 198-foot tunnel out of a solid granite cliff which led to the 258-foot elevator shaft. It took eight tons of dynamite and 18 months to complete this massive piece of construction. The elevator was opened to the public in May 1949, the same year the entrance parking lot, three-mile drive to the top parking lot and upper parking lot were paved. Next, the Sky Lounge, a gift shop and snack bar, was built on top of the mountain."

I decided to take the Outcroppings Trail (leads to the top of Chimney Rock): 499 steps 1-way.  As I began my ascent up the mountain, I was happy to find little rest areas along the way. 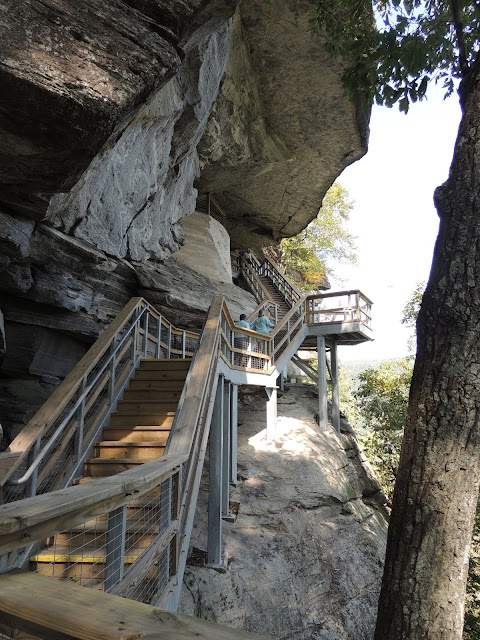 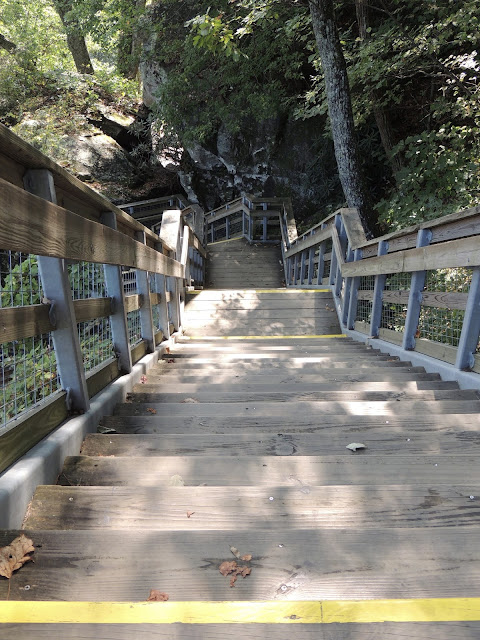 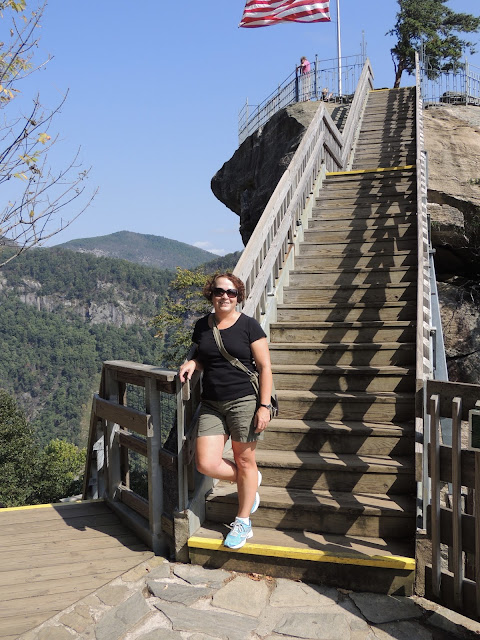 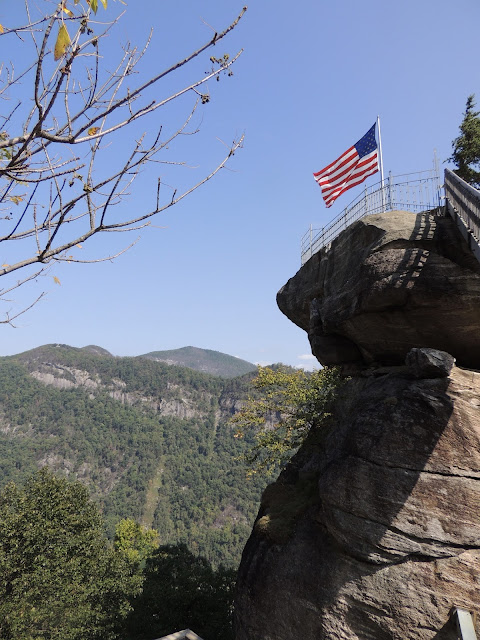 You can see Chimney Rock Village far below... 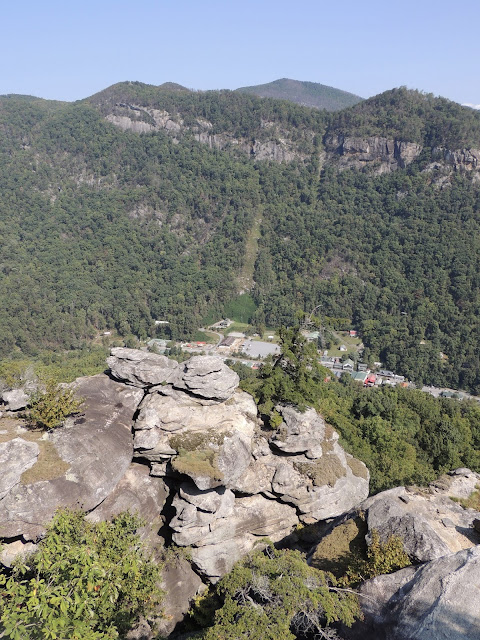 Lovely Views From the Top.. 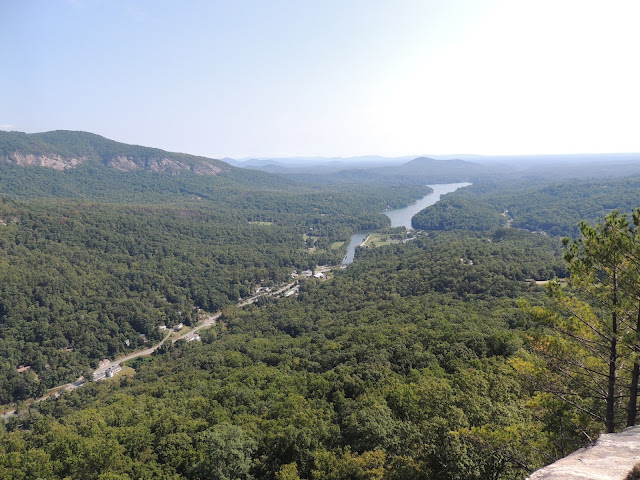 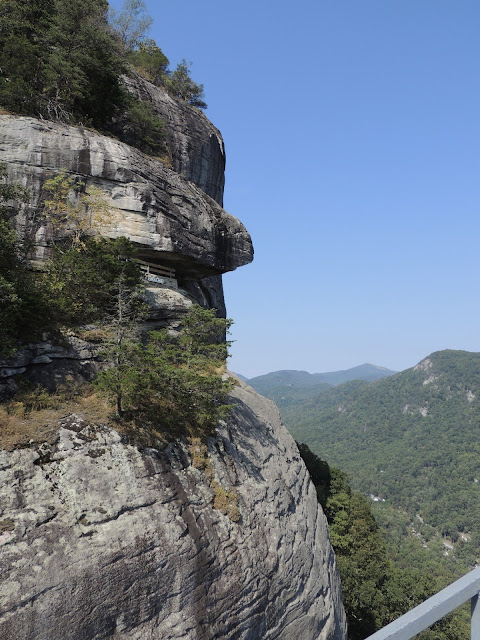 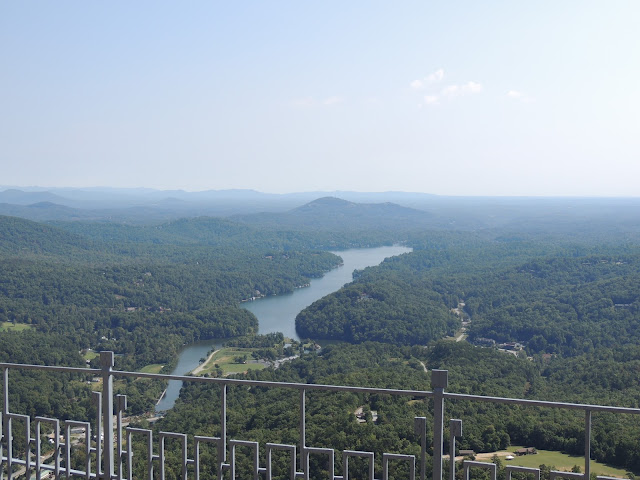 What a beautiful view from the top of the Chimney Rock.
I wish I would have had the entire day to explore Chimney Rock State Park.  They have numerous trails to explore; there is an animal discovery den, rock climbing, and a waterfall.  They have a cafe and gift shop.
If you get the chance and you feel like hiking up a few hundred steps I suggest you visit Chimney Rock.  Don't forget your camera.
Happy Travels!
KathieyV:-)
Email Post
Labels: #ChimneyRockStatePark #ChimneyRockVillage #ExploringNCwithKathieyV #kathieyvwriter #NorthCarolina #Travel #Travelnc